I moved to the Netherlands in June 2014 and vowed that I would do my utmost to visit as much of the country as possible if I was going to call it home. I soon learned of a village called Giethoorn in the Overijssel province. It is inaccessible by car and has plenty of walking and cycling trails, but more excitingly, canals for boating. Now, you may be struggling to see the appeal for an Amsterdammer to go somewhere like Giethoorn considering that my home city is not exactly lacking in canal action itself and which also bears the moniker of ‘Venice of the North’ – why come up with a new name when this one can, quite frankly, be applied to almost every Dutch city? Anyway, I digress.

My boyfriend’s birthday was fast approaching and we had discussed going away somewhere for a few days. Respite was much needed having just spent four days in my one-bedroom apartment in the company of my mum, sister and nephew, so the pictures of Giethoorn conjured up what I thought would be the perfect tonic.

I approached a couple of Dutch friends and colleagues asking for recommendations and they were nothing if not consistent in their advice: “don’t bother going, it’s full of Chinese tourists”. Unbeknownst to the Dutchies, however, this was actually a draw for me having spent the last three years feeling like a midget in this land of blonde giants. It’s also why Japan remains my favourite holiday destination, that and, well, everything else. Although if I never saw another squat toilet it’d be too soon. I thought I had the requisite thigh strength, but the splash back confirmed otherwise. No wonder the Japanese live so long though; they’re super supple. 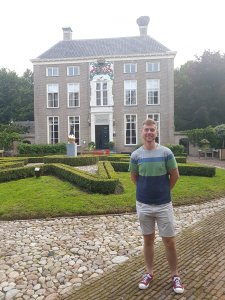 I booked a room at Chateauhotel de Havixhorst which turned out to be nothing like a chateau. Or a hotel for that matter if it’s lack of toiletries, mini bar and room service were anything to go by. It was however conveniently located near Giethoorn and we set off in our rented wheels.

The following day we drove the 20 minutes to the outskirts of Giethoorn, admiring the many storks in the neighbouring fields which were protected in the area. We found this out thanks to a kindly old woman who humoured our basic Dutch having struck up a conversation in the hotel bar one night. Unlike her husband, who was rather rude when I got stumped on a word and switched to English. Thankfully I’m fluent in eye-rolling.

We picked up our handmade, wooden ‘fluisterboot’ which glided silently through the calm waters and after a simple demonstration we set sail. Without a sail, natch. After a couple of hours we still hadn’t seen a Chinese tourist (as you can see from the below video), but we did see what all the fuss about; Giethoorn is simply stunning. Each dwelling on it’s own little island with well kept gardens (you’d have to really with all the gawpers) overflowing with rhodedendrons.

We were allowed to keep the boat for nine hours and took full advantage, exploring all three of the recognised routes. We decided to navigate the main canal line one more time as sunset was approaching and I thought we’d get some Instagram-worthy pictures. But what is that I see over the bow? Why, it’s a million Chinese tourists, 999,999 of whom had never driven a boat if the carnage below was anything to go by.

It was time to return the boat and drive back to the hotel and avoid the mean old man. Unfortunately the lack of a mini-bar in our room (I promise I’m over it now) meant that we had to chance the communal bar but thankfully he was nowhere in sight. In fact, no one was, so we clinked our glasses in peace and toasted an awesome day in a beautiful part of this awesome country. I think I did pretty well for a first birthday present all in all.

4 thoughts on “Giethoorn – the ‘Venice of the North’”